Latino Outreach Consulting of NC, Inc. was founded in 2005 by Arianna M. Aguilar in Smithfield, NC in response to the need of translation and interpretation services in the area. 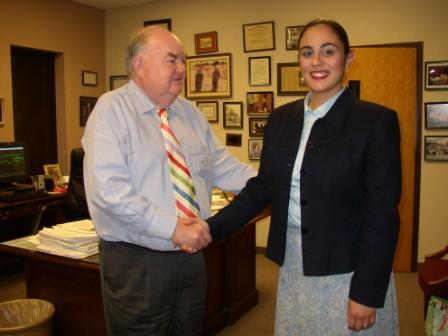 Arianna M. Aguilar is sworn in as a Certified Interpreter by Johnston County Clerk of Superior Court, 2005

Arianna graduated in 2000 in Western New York with a communication and graphic arts degree. She honed her interpreting skills through hands-on experience and training in the mental health, education, and child care fields.

From 2010 to 2012 she was employed by the North Carolina Administrative Office of the Courts as the Staff Interpreter for the 11th Judicial District of North Carolina (Johnston, Lee and Harnett Counties).

In 2013, she was awarded Master Certified Interpreter status by the North Carolina Administrative Office of the Courts. In 2017, she became a Certified Medical Interpreter-Spanish.

We are happy to help you with your Spanish language interpreting and translation needs.