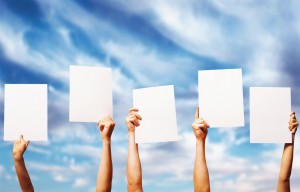 It was Saturday afternoon. I was putting the finishing touches on a project I was working on.  I went to the kitchen to get something to drink and when I came back to my desk, there was the dreaded blue screen aptly named in tech circles as the Blue Screen of Death, and with reason. After three hours on the telephone with technical support, the only thing that could be done was to reinstall the operating system, and all the data stored on the hard drive was lost. Even a computer technician was unable to recuperate the data stored on the hard drive.

Fortunately I had some data backed up, but I was missing some key accounting files. Those files I would never get back. That’s when I regretted not using the “Cloud” for my accounting data backup.

What is the “Cloud”?

We seem to be hearing a lot lately about the Cloud. It appears on television commercials for computers, cell phones, and tablets. So what exactly is the Cloud?

The term “Cloud” seems a little abstract and ethereal, and in some ways, it is. Eric Griffith, writer for PC Magazine, wrote that the “Cloud” is simply a metaphor for the Internet. He said, “It goes back to the days of flowcharts and presentations that would represent the gigantic server-farm infrastructure of the Internet as nothing but a puffy, white cumulonimbus cloud, accepting connections and doling out information as it floats.” (Griffith)

He further explained that the computer industry functioned for decades by solely depending on hardware (your computer’s hard drive, for example) to store and run applications and information. Now, however, computer users have the option to store and access data and programs over the internet; i.e. “cloud computing.”

You probably already use some Cloud applications. Web-based email services such as Gmail, Hotmail and Yahoo are considered cloud-applications, and are the most popular web-based services in the world. In fact, according to technology reporter Niall Magennis, “Current usage figures suggest that the three big names mentioned above have around 1 billion users between them.” (Magennis).

Another example of a well-known and widely used Cloud application is Gmail’s Google Drive. If you upload files to Google Drive, you can access and edit them from any computer, tablet or smartphone. For Apple users, there is iCloud, which according to the Apple website, “lets you access your music, photos, calendars, contacts, documents, and more from whatever device you’re on.” (Apple).

Some companies sell Cloud “SaaS” (Software-as-a-Service) services via a monthly subscription, which Samara Lynn from PCMag.com explains, is “a specific application or service offered to a customer as a subscription. Dropbox, Salesforce.com and Quickbooks are all examples of SaaS.” What this means is that the online service replaces the traditional software in a box. (Lynn).

As Lynn mentioned, Quickbooks offers an alternative to software in a box, by offering either services completely in the Cloud or hybrid services. Their services in the Cloud are available in tiers which vary in cost and featuresIf you chose to go online, you don’t have to install Quickbooks software on any of your devices since it is accessible in the Cloud. If you have multiple users or are on the go, you can save money by using online services because the programs are updated automatically and you don’t have to continue buying the software in a box, which becomes obsolete every year. Or, if you don’t want to put all your data in the Cloud, you can pay for a hybrid service where Quickbooks allows you to pay for online backup on their servers.

Another example of a SaaS application that Lynn mentioned is Dropbox, touted as a backup utility software. It is considered a hybrid service, because when you install Dropbox on your computer, it retains a copy on your local storage and synchronizes it with an online version. With this service, you can log on using any web browser and access the files that you need, and you can grant access to other users to specific folders or files. That feature can make collaboration with colleagues and clients more manageable, since you can both see and work on the same data. Like most SaaS applications, Dropbox offers different tiers of service. You can get free service for up to 18GB or you can purchase all the way up to Terabytes of information. Similar services include Box, Skydrive and Sugarsync amongst many others.

Advantages of Using the Cloud

A huge advantage of using the Cloud is that it is an inexpensive and nearly hands-off way to store and backup your data. You can have practically unlimited storage. If your computer were to crash all you would have to do is log on another computer to regain access to your files.

Indeed, after my computer crashed and the operating system was reinstalled, the files that I had stored on the Cloud were accessible via the internet. It took about five minutes to reinstall Dropbox, the cloud service that I use, and my files where right back where and when I needed them.

Another advantage of using the Cloud is that your employees, clients or colleagues can access the same information remotely. For example, in my case, I use Google Drive to keep track of upcoming appointments. My staff can access and make changes to the schedule as needed either from a tablet, smartphone or computer.

Also, since most cloud computing data storage programs give a large amount of space, it facilitates the transfer of large files that won’t fit onto an external storage device like a CD or USB flash drive.

By using the Cloud, you don’t have to worry about scheduling regular backups. You may also be able to cut back on the cost of software and hardware.

Disadvantages of Using the Cloud

Although much can be said for cloud computing, the reality is that there are some disadvantages.

For example, even the best services have technical issues. Bloomberg’s Rochelle Garner wrote that a power failure knocked out Intuit Inc.’s servers in June 2010, and 300,000 customers of programs such as Quickbooks, Quicken and Turbotax were stranded. (Garner).

She said, “It showed the challenges in shifting from selling shrink-wrapped software to Internet-based services.” (Garner)

Since you are depending completely on a remote server to save your data, if anything goes wrong, you can lose access to your information either completely or temporarily. Also, if you have an internet outage, you may be stuck without service.

Storing information in the Cloud could make you vulnerable to external cyber attacks and other threats. According to About.com’s Priya Viswanathan, “As you are well aware, nothing on the Internet is completely secure and hence, there is always the lurking possibility of stealth of sensitive data.” (Viswanathan).

Put your head in the clouds?

Whether or not you decide to expand your use of the Cloud, cloud computing can be a modern, inexpensive and efficient tool for your small business. Even if you decide not to risk using cloud-based services exclusively to run your business, it would be a smart move to have it as an option in the case of an emergency. If only I had everything on the Cloud, I wouldn’t be spending hours recreating my files. Lesson learned!